Mark Person can still recall the day he met Sandy Turner 28 years ago. Both were living in Columbus, Ga., and it was an unusual pairing. Person was a 20-yearold African-American man attending college. Turner was white, slightly older and working as an Army secretary stationed at nearby Fort Benning.

But they hit it off. And when Turner moved to Provincetown about two years later, she invited Person to come up for a visit. That trip changed his life. He ended up moving to Provincetown and a short time later began dating Turner, eventually moving in with her. She helped him find his place in town — including various jobs such as coaching basketball at Provincetown High School for five years.“Everyone was so good to me in Provincetown. And Sandy really helped me. Even after we stopped living together, we always were very good friends. Once she loved you, she loved you. She was such a special person,” Person said.

While the two gradually went their separate ways — Person eventually into music production and Turner rising to become assistant director of the Provincetown Dept. of Public Works — that affection remained. They reconnected recently and had dinner at Napi’s, where he gave her a CD of a musician he manages, Gary Foote.

Ten days later, Turner was dead, the result of unexpected complications following hip surgery. Person is having a hard time wrapping his head around the loss of his friend. So he decided to dedicate a night of music to Turner and her family, coming full circle, he said, by connecting the past to the present.

The concert will feature Foote, a composer, producer and bass player, and four other accomplished musicians who appear on his album, “HarlemWorks.” One of them is his wife, Jenny Douglas, a singer who has worked with a plethora of artists from very diverse music genres, including Pink, Cher, Janet Jackson, Mick Jagger, as well as singing back-up for Lenny Kravitz when he opened for U2 before a crowd of over 60,000 in San Francisco. Douglas has also provided back-up vocals for Elton John, Tina Turner, Madonna and Snoop Dog and has performed steadily with Toto since 1990. Foote has a similarly impressive resume. In addition to backing up iconic artists such as Smokey Robinson, Billy Cobham, Maxwell, Wu Tang and Blood, Sweat and Tears, Foote has worked behind the scenes scoring films and TV commercials. His style on “Harlem- Works” is a combination of funk, jazz and R&B. The tribute concert, at 8 p.m. Saturday, June 9, at Provincetown Town Hall, promises to be a mix of cultures, just like Provincetown itself, Person said.

“There’s going to be that Motown feel. But they’re going to play [George] Gershwin. They’re going to play Herbie Hancock. Gary will play four or five songs from his CD. He’s composing this show specifically for Provincetown,” he said. Turner’s family is expected to attend the performance. The pallbearers at her funeral will be ushers at the show, Person said. And a plaque in memory of Turner, “from all who loved her,” as it will state, will be presented to the family at the beginning of the show. It is slated to be installed on one of the Town Hall benches.

“The town has been so wonderful,” Person said. “David Gardner, Sharon Lynn, Darlene Van Alstyne in licensing. They’ve all been so helpful. I want the show to be very elegant and nice. I want everyone to feel they’re coming to Sandy’s home.”

Accompanying Foote on June 9 will be Argentinian pianist Dareo Boente, Ken Gioffre on saxophone and Tony Lewis on drums. Tickets are $32 and can be purchased at dreamproducer.eventbrite.com.

“Slices of life through the prism of the heart”
Written by Anne Lerardi  |  November 8, 2012 |  www.thebarstablepatriot.com 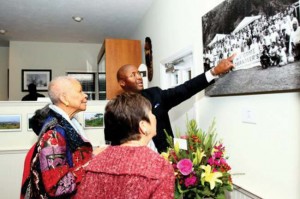 Mark Person’s photographs capture his perspective on life growing up in rural Alabama and Georgia: his dreams, his family, his faith. An enthusiastic crowd gathered at the Zion Union Heritage Museum in Hyannis Nov. 2 for the opening of his solo show, “Staying Grounded.” Mark warmly greeted me, leading me through the exhibit, welcoming me into his world. “As a photojournalist,” he explains on his website, “I deeply feel an imperative to extrapolate and capture slices of life through the prism of the heart. I am a vessel, with Spirit and the wisdom of my ancestors moving through me.”

“Metaphor, how the image grabs you, is most central to my work,” he said. He brings me over to a close-up photo of a cotton plant. “I was driving on an assignment as a photojournalist and was lost. There I came face to face with this field of cotton and I realized, ‘This is my roots. I must never forget where I came from.’”

As a white kid from Boston, I first saw pictures of cotton in the Sixties when a special curriculum on “Negro” history and slavery was introduced in my ninth grade civics class; the images and stories deeply impacted me. Seeing these buds of cotton through Mark’s lens, I saw not only the struggle but also the beauty. In Person’s words, “Beauty and metaphor are everywhere.”

Next, Mark pointed out a picture of a wooden house. “I used to sit on that porch with my grandfather as a child,” he said. “He encouraged me to dream.” Next to that photo was the newly erected sculpture of Martin Luther King in Washington: Dr. King, arising out of the massive stone, his deep voice echoing the biblical witness, the overcoming of oppression, that can emanate out of one person’s dream.

I am particularly struck by a large photograph of a family, a very large family of many generations. They are proudly holding a banner: “Chandler Family Reunion.” I learn from Mark that he is from a family of 10. “There’s my older sister; she believed in me and helped me get my first job. In the front row are my mother and her sisters.” Mark has a special way of releasing the image to a broader consciousness. Metaphor speaks to the heart as well as to the mind. Mark’s family becomes my equally large Italian-American family and from there we become one family embracing all humankind.

Mark pointed out a portrait of three of the Tuskegee Airmen, the first African-American military aviators in the United States armed forces. “I interviewed the man in the middle. They were courageous and highly skilled. They weren’t allowed to serve in combat because of the racial attitudes in 1941. They are all in their nineties now.”

A large central wall of the museum has three pieces. In the middle I am fixed on a foreboding stark stone structure with bars over the entrance and the words MART and underneath “OLD SLAVE MART MUSEUM.” To the left is a photo of a St. Francis sculpture and to the right a statue of Christ in the midst of tall flowing reeds, arms outstretched in a welcome. While I am arrested by this metaphor of human suffering, I take refuge on either side from Francis, the saint of peace and Jesus, the man of compassion.

Mark has found another home on Cape Cod: “I found my passion on Cape Cod Bay in the winter of 2010,” he writes on his website. “With my Blackberry, I snapped a photo while meditating on a glorious sunset over the still water. Something ‘clicked’ in me, too, a profound sense of hope and peace that a new dawn was about to break.”

Mark Person is a multi-faceted artist. He is involved in publishing and has created an upcoming book, Finding Peace through Photography. He also founded Middleman Productions, to manage and promote top recording artists. From Jan. 30 through Feb. 17, he will have another exhibit at the Cultural Center of Cape Cod in Yarmouth, with an opening Feb. 2. Two concerts of his recording artists will also take place there, on Feb. 9 and 16.

Zion Union Heritage Museum is a living witness to the stories that have shaped and continue to shape African-American and Cape Verdean lives. It is a place for all of us to connect to our humanity. In Dr. King’s words, “Until all are free, none are free.”

You will be richly rewarded for availing yourself of the time to visit the museum at 276 North St. in Hyannis (508-790-9466). “Staying Grounded: The Photography of Mark Person” will be on exhibit through Feb. 28. 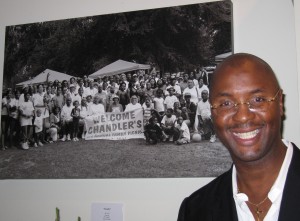